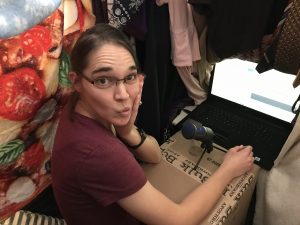 If you’re here to listen to SC Monson read a thirty second sample from her book Badgerblood: Awakening, then you’re in the right place!

Narrating takes a lot of time and energy, but at some point after the book or series is published we hope to make it available in audio format. For now, click below to listen to a sample.

Prefer to read it yourself?

No problem! Here it is in writing:

“The tingle came from his pendant. His hand went briefly to the bulge under his shirt where it lay concealed. The sensation was constant and dim, like a flickering candle. Whenever he wore the bone piece, he felt it. It offered a smidge more strength, comfort, and relief in his injuries and from his nightmares. But the feeling was always muted, incomplete, like a wide riverbed with only a trickle of river. He clung fiercely to the tingle anyway as he always had, using the strength and comfort from it to push back against the pain.”

We live in a fairly small apartment with only one clothing closet. For those who have never attempted recording, a closet can be a great place to start. (Be sure you have a good microphone as well! And a pop filter is a great investment, though we’re still working on getting one ourselves.) The clothes help dampen sound and create an atmosphere conducive to capturing your voice on the mike without other pesky noises sneaking in.

However, while our closet has sound-dampening clothes, it is also very tall with two bare walls and a door. So to minimize any hollow or echoey sounds from said walls and door while recording, I created a fort of sorts. (Ha! A rhyme in time.) It was possibly the most boring fort ever created, but clothespins were involved, so a fort it must be called.

After stacking couch pillows against one wall, I draped blankets over the door and my head, connecting them with the aforementioned clothespins. And voilà! A sound studio was born.

Then it was on to recording.

I started out narrating the first few chapters of the book using a recording program on the computer called Audacity. I tried to voice the passages with emotion and energy and let my husband listen to some of the recording to gain some constructive criticism and advice. If I fumbled, I’d reread the sentence or phrase, usually with the recording still rolling. When I was satisfied with a delivery, I’d move on. Because this was mostly for practice, the process was not as painstaking or long as it might otherwise have been. Despite being time-consuming and a bit tedious at points, it was still a load of fun!

To get the final audio you heard above, I selected a piece from my narration that I felt was well-recorded and sounded intriguing without needing a lot of context. Then, I cut and pasted the selection into a new Audacity file, making it easier to manage and navigate. Before saving the recording, I cleaned it up a little by cutting out extra breaths and noises. And that pretty much wrapped up the process for this particular scenario.

Got any tips for voice acting and recording? Please drop us a line in the comments below. We’d love to hear from you!